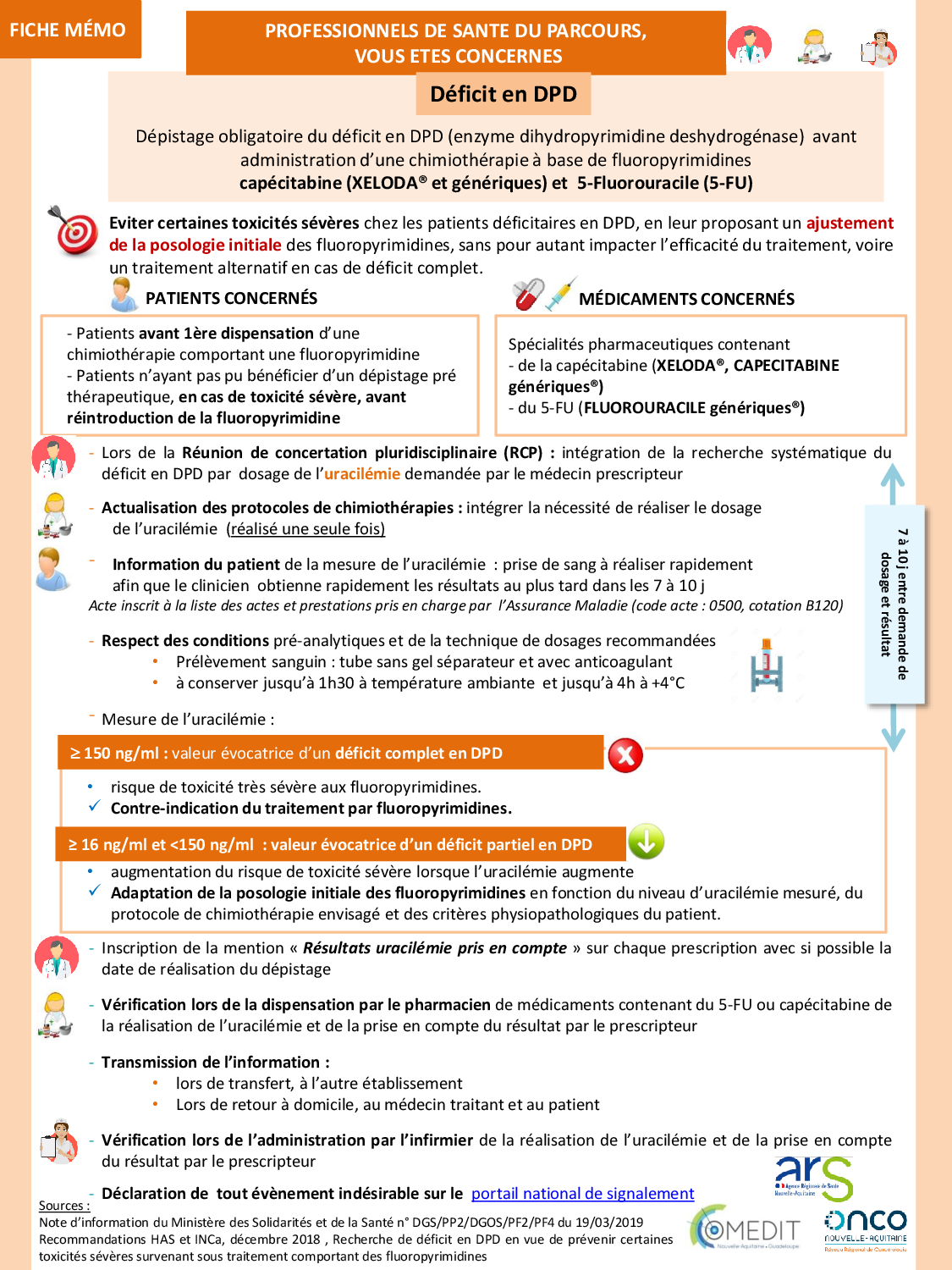 My husband of 51 years, David McIntyre, passed away in the ICU at Oregon Health Sciences University Hospital in Portland, OR on December 12, 2018.  David was diagnosed with Stage 1 Bile Duct Cancer (Cholangiocarcinoma) in July of 2018.  He had a successful Whipple surgery and recovery, had clear margins and no metastasis, and was pronounced “cancer free” by his Radiation Oncologist.  His oncologist, however, prescribed the highest dose of Capecitabine as adjuvant chemotherapy for pre-cancerous cells, going against the recommendations of the 14-member Liver Tumor Board to start with one-fourth of the dosage to see how he tolerated it.

The literature we were given by the oncologist and the pharmacy about the Capecitabine listed all of the usual side-effects, with only one line about not taking it if you had a DPD enzyme deficiency.  No symptoms to watch for, so we thought that was a non-issue.  The most serious side-effect discussed with us was Hand-Foot syndrome, for which we received separate handouts and a medication prescription.

There was no mention that 1 in 1,000 people have the genetic DPD enzyme deficiency which could be fatal when taking Capecitabine; a blood test to detect the DPD enzyme could have been offered prior to starting the chemo; and the symptoms to watch for of early-onset DPD toxicity.  So we started the chemo with little concern, as we were told that it was well-tolerated and widely prescribed.

On the 7th day of his first round of chemo (the day after Thanksgiving), David began to experience vomiting and diarrhea.  On Saturday, his symptoms increased to a few mouth blisters and the start of a rash on his face.   I phoned his doctor’s office, but because it was Saturday and I felt it was not an emergency (yet), the best I could do was leave a message for the nurses.  Sunday, his condition worsened.  On Monday I called the oncologist’s office again said that I felt he needed to be seen.   I was advised by the oncology nurse to jut take over-the-counter medications for these symptoms (Imodium for diarrhea and Claritin for rash).  I asked her to alert the oncologist of his symptoms.

On Tuesday, I called again, said that I was taking him to the ER, and asked that his doctor be alerted, along with the ER staff.  He was kept in the ER overnight as an “observation” patient, treated for each of his symptoms individually, and sent home Wednesday with a handful of prescriptions for each individual problem.

His condition worsened Thursday, and again on Friday I called the doctor’s office and was told to take him to the hydration clinic on Saturday morning for fluids.  On Saturday, his temperature was 101 deg. I took him to the ER, he was quickly admitted, and all symptoms, including neutropenia, were in full force.  It was not until Monday when the Interns, Residents and Oncologists made their rounds that one very experienced oncologist recognized his symptoms as DPD enzyme deficiency and knew exactly what we were dealing with.  But it was too late for the antidote.  A DPD blood test was ordered (as non-urgent) and the $243,000 Vistogard was ordered but was not scheduled to arrive until Thursday (and now we were 8 days beyond the 96-hour window for a cure).

Had all of the medical staff (oncology nurses, ER staff and especially his oncologist) who I alerted to David’s symptoms responded quickly and treated him appropriately as having a fully systemic breakdown indicative of a DPD enzyme deficiency, rather than treating each of his symptoms individually, there would have been time to administer the antidote, VISTOGARD, in the critical 96-hour window following last chemo pill.  His oncologist did not see him in person until a week following my first phone call, asking for help.

David died an excruciatingly painful death seven days following the start of Vistogard.  He suffered three strokes; developed pneumonia, aspirated; his entire body was decimated, and he was essentially comatose the last days of his life.  Our family is devastated.  And angry.  And determined to spread the word about DPD enzyme deficiency and pre-testing prior to starting Capecitabine/Xeloda (or 5-FU).  In the meantime, there are steps to take to recognize and respond to the symptoms and administer Vistogard in time to save a life.

Thanks to the advocacy of Ken Surprenant, the FDA has changed some of its wording on labeling for Capecitabine, but the needed blood test or breath test are still not within reach I fear.  Interesting, David’s blood work came back in 4 days and showed that he did have a significant DPD enzyme deficiency which put him at “high risk” for exposure to Capecitabine.  The cost of the blood work:  $200.  The cost to the hospital:  about $600,000.  The cost to David and our family:  a lost life.

We hope to raise awareness of this issue with patients starting Capecitabine and with Oncologists, their nursing staffs and ER staffs, who are all on the front line of early diagnosis.  And while we are waiting for blood tests or breath tests to at least be offered, the necessity for educating patients, oncology nurses, ER staffs, and the oncologists about the DPD enzyme deficiency issue when prescribing these chemotherapies needs to be ramped up.

David McIntyre had a fatal reaction to OHSU’s chemotherapy for his cancer, his wife, left, claims in a lawsuit filed against the university.

By Fedor Zarkhin | The Oregonian/OregonLive

The Portland man died a painful and unnecessary death, according to the suit, because a university doctor didn’t tell him there is a test for the rare but potentially fatal genetic condition the man had. The doctor also failed to do the test on his own initiative and failed to act promptly after the patient had a severe reaction to the chemotherapy, the suit says.

“I’m stunned that OHSU does not advise people that this medication can kill them and that there’s a simple test that can prevent any death from this medicine,” said Jim Huegli, the attorney representing the patient’s wife, who filed the suit last week in Multnomah County Circuit Court.

The suit names OHSU as the defendant but not the oncologist who treated him, identified in the lawsuit as Dr. Adel Kardosh.

David McIntyre’s treatment started out well. He had successful surgery for his Stage I bile tract cancer in September 2018, according to the suit. A radiation oncologist declared McIntyre cancer-free, said his wife, Joanne McIntyre.

“We were elated,” she told The Oregonian/OregonLive. “He was so positive. We were planning our next trip that we were going to take together after Christmas.”

But David McIntyre’s oncologist ordered chemotherapy to rid him of pre-cancer cells, Joanne McIntyre said. A week later, her husband started to show signs of a severe reaction to the medication, with vomiting, a rash and diarrhea, according to the suit.

Joanne McIntyre said she called the hospital multiple times about her husband’s symptoms before insisting that he be checked in to the emergency room. He was discharged the next day, according to the suit, even though he couldn’t walk without a wheelchair.

David McIntyre kept getting worse. He checked into the hospital one last time Dec. 1. Three days later, his wife said, an OHSU doctor realized her husband was having a toxic reaction to the chemotherapy.

Joanne McIntyre later learned he had that reaction because of a genetic disorder that the U.S. National Library of Medicine says could affect 2% to 8% of the population.

People with the disorder can have difficulty processing 5-FU, a type of chemotherapeutic drug critical to treating colon and similar cancers, said Dr. Lucy Langer, an oncologist with Compass Oncology, a network of cancer centers in Portland, Tigard and Vancouver.

Langer isn’t involved in the suit but spoke about her experience as an oncologist.

The deficiency can lead to severe diarrhea and dehydration and, in some cases, death.

The lawsuit claims that it was too late to save David McIntyre by the time OHSU discovered the problem. There’s a treatment for the toxic reaction to chemotherapy, but patients must take it within four days of first showing symptoms, according to the suit. It had been 12 days since his first symptoms showed before OHSU realized what the problem was, according to the suit. McIntyre died Dec. 12, 2018.

“In effect, the patient died of the treatment, not the cancer,” wrote a California oncologist who reviewed McIntyre’s case for the lawsuit.

“There really is no accepted standard for testing,” Langer said.

Langer said she does not usually tell her patients that a small percentage of people have the anomaly and that it’s possible to check for it. As far as she knows, there’s no standard worldwide to test for it. If a patient was to bring it up on their own, she said she would tell them that there isn’t good data on how to interpret a test and that the chemo treatment is so important that a positive test result wouldn’t necessarily mean that the patient shouldn’t get the treatment.

Still, if a patient is tested positive for the mutation, Langer said doctors should “tread very lightly” and monitor patients closely for any toxic reaction.